This will place a number in your menu bar that is constantly reading and updating the current power output (or input) of your battery.

Using a Mac on battery makes it look like a continuous flow from 100% charge down toward 0%. But we did a bit of research on this assumption and found it couldn’t be further from the truth.

What actually happens during the life span of a single battery charge is typically that the usage goes in spikes, and while a healthy battery will usually hover around minimal usage, it is common to have processes that are unnecessary and that you are usually unaware of taking your battery usage 5 to 7 times higher than normal. That’s about the same time as you hear your fans going on sometimes, if it goes on for long enough.

Processes that do this are often there for archaic reasons. Other times a single small animated image that’s been left open for the last 3 days in one of your hundred tabs on your web browser that’s being left open will be the culprit, because it’s chewing up 100% of one of your CPU cores. Other times it will be a monolithic application such as Word left in the background, unbeknownst to you tying up more resource usage than the rest of the entire operating system put together.

Battery Guru is simple. It shows you a number in your menu bar. This number is the measure of electrical current that is currently flowing out of your battery. As mentioned, high CPU usage can cause this number to increase wildly. Another thing that can make it increase are if your discrete graphics chip kicks in to process intensive graphics, or perhaps unnecessarily because it thinks it should be processing intense graphics but really it’s just a tiny animation somewhere that you don’t even notice.

From the moment where you install Battery Guru you will start to become vaguely conscious of this number in your menu bar, much like you’re vaguely aware of the hour most of the time. You will see if this number massively spikes, and you will correlate it with a change on your system. Much of the time will then probably decide that you don’t in fact need to have that web page open that’s decreasing your current battery usage to 20% of what it would otherwise be, and close it. This is the peaceful way of getting a lot more life out of your battery on an every day basis. 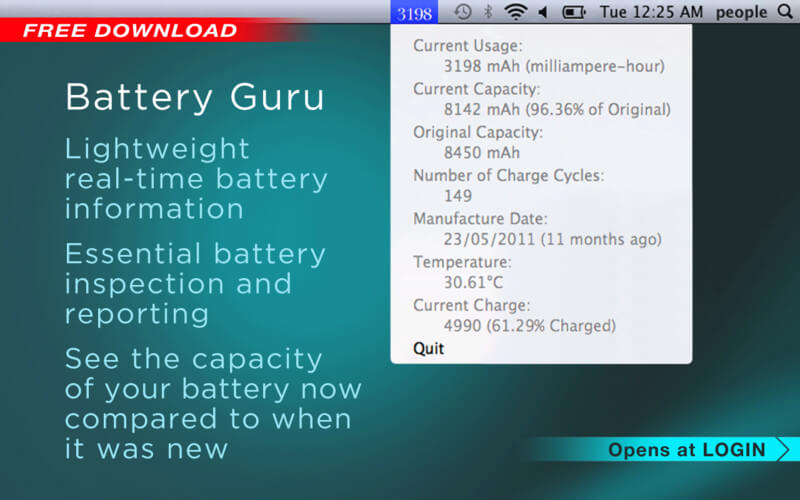 Uninstallation:
All of the apps on MacDaddy are fully self contained and easy to uninstall. Drag and drop the application to the trash in the Finder. This will remove everything.