A clone of your data is something that you always need any time you have data that you would rather not lose.  Creating a clone of a volume onto another disk will allow you to boot your operating system from that external disk if your regular startup disk is happens to stop working at any point and carry on from where you left off as if nothing happened.

To create a Bootable Clone:

Important notes if you want the volume to be bootable:

Finally: After you have created a clone you may later wish to update that clone to reflect your latest changes on the Source. This may be done manually or by letting a Schedule run automatically. When you have the same Source and Destination selected as previously Mac Backup Guru will automatically only update the files on Destination that have changed since the last backup in order to save time. It does this by comparing each file size and date modified on each file on the Source with that on the Destination, and it only copies over the file again (overwriting the old one on Destination) if either of these are different.

Incremental Snapshots will create a date and time stamped list of folders on the destination, each of which contains the files as they were at that point in time. This can be useful for restoring old versions of files. It looks like this: 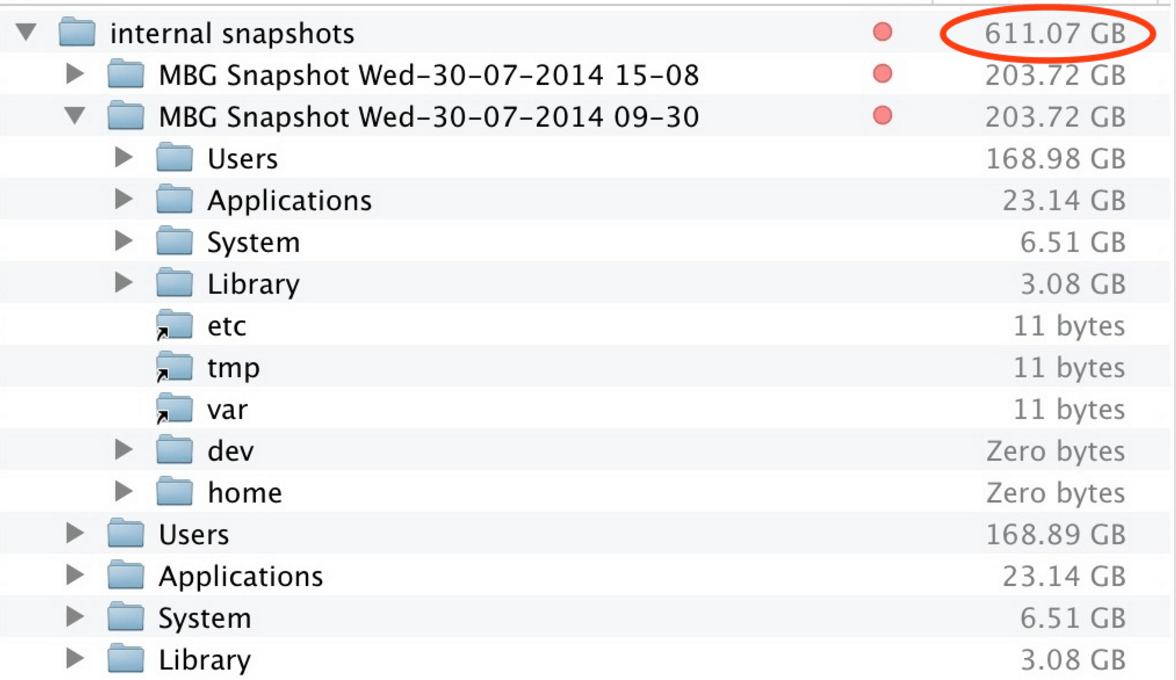 As you can see, the top level of the folder will be a list of folders in the format “MBG Snapshot…” followed by the time date and time. Although the folders will appear to occupy a lot of disk space, in reality they do not. For example the above screenshot was taken on an external disk that only has 250GB of capacity, and it’s reportedly using 611GB. This is achieved with the magic of hardlinks.

To create an Incremental Snapshot

1: Select your source. This is usually your startup disk, which is selected by default. You can also select a folder by clicking the rectangle which by default displays the Startup disk.

2: Select an external disk in Destination. It is fastest to select it using the drop down list. You can also select a folder by clicking the rectangle underneath “Destination”.

4: Click Backup. Mac Backup Guru will initially create a clone of the Source to the Destination.

There are several possibilities here:

Note: With all Incremental Snapshots the initial backup has to be a clone in order to be able to later use that clone to create hardlinks. So the initial backup will not save any space over traditional backup methods. However subsequent backups will utilize hard links and save disk space & be performed much faster than traditional backups. The only way for hardlinks to be created is to create a scheduled backup and let it run automatically from there on.

Setting up a Schedule

Mac Backup Guru can update a Clone or create a new Incremental Snapshot automatically on a schedule.

To access the Scheduling pane click on “Saved Backups & Schedules” on the main window. This shows the configuration pane so that you can choose the days & time that the backup will be performed.

If the backup disk is not connected at the time that the schedule is set to occur Mac Backup Guru will wait until the next time that the disk is connected and instantly start the (now overdue) backup when it is. This is useful because it allows you to simply plug your disk in for a scheduled backup to start, without needing to click a single button. And you can be confident that this will only occur when a backup is overdue, and that it won’t happen unnecessarily. Even still, if you do not want a backup to occur any particular time that you plug the disk in, you can simply hit Stop and then it will wait until the next scheduled backup is due until it tries to start the backup again.

“Recent Snapshots kept” is relevant only if you have “Make Incremental Snapshot” selected. Before the next backup is started this will automatically delete the oldest backup when the number of created Snapshots surpasses the number entered here, which defaults to 10. This is useful for keeping the Destination disk’s quantity of backups created in check as otherwise you can end up with many millions of files on it if you let hundreds of incremental snapshots of an entire disk accumulate on it.

It’s safe to manually delete any the old Snapshots that are present on a disk except for the very last one that it completed. That is because the last one created is used to create the next one it will create in the future, otherwise it’ll have to make a new backup from scratch. The last created snapshot should not be removed or renamed in order Mac Backup Guru it to locate it correctly.

You may wish to exclude files that are not particularly important. Or if you just want to backup a bootable copy of the disk and keep it small for a quick to execute backup, sometimes excluding the entire /Applications folder can be useful. If you hit “Exclude…” it will bring up a standard dialog box for you to select any files or folders that you want. Note that this dialog box supports multiple selection, allowing you to choose thousands of files to add to the list in one go if you want to.

If you select Mac Backup Guru -> Preferences from the menu you will see the following options:

Wait until power is connected before starting a scheduled backup

Never delete anything on the root level of the Destination (recommended)

Mac Backup Guru can also be operated using the contextual menu in the Finder. To enable this:

Once you’ve done that when you right-click on a file or folder in the Finder, you will see a menu like this:

This operates in the same way as the regular Copy/Paste in OS X, apart from it will be a lot faster and it will make true copies reliably, without any of the permissions errors, or failed copies that you sometimes get with large or complex folder hierarchies when you use the native Finder copy. If you copy a bootable volume such as your startup volume to a USB stick or other bootable device, a bootable disk will be created.

• It is stopping before it has completed copying all the files